McIntosh
has announced its newest stereo power amplifier, the MI502. Part of the
company’s extensive line of custom-install products, the MI502 is relatively
compact for a McIntosh, at under 4.5 inches tall. But it packs a lot of Class D
power, delivering 500 watts per channel into 8Ω, and 800 watts into 4Ω.
McIntosh says that the MI502 uses “high-tech closed loop digital switching
amplifiers and resilient power supplies that produce performance levels seldom
heard in custom install audio.” The MI502 can be used just as you’d use any
stereo power amplifier, but McIntosh has some suggestions. It could power the
front left and right speakers in a stereo or home theater; it could drive two
in-wall subwoofers; it could power a pair of outdoor speakers; or a pair of MI502
amps could power the three front channels of your home theater, plus one
passive in-wall subwoofer.
Finally, a whole stack of MI502 amps could power distributed audio speakers
installed throughout your house. Even if this amp is destined to be hidden away
in a rack, it still carries some signature McIntosh
design cues, including a black
glass front panel, the company’s unmistakable blue power meters, and an illuminated McIntosh logo.
The back panel includes one pair of balanced XLR inputs and one pair of
unbalanced RCA inputs. The MI502 is rack mountable (2U height), and runs quiet
thanks to its fan-free design. It will sell for $4,500. 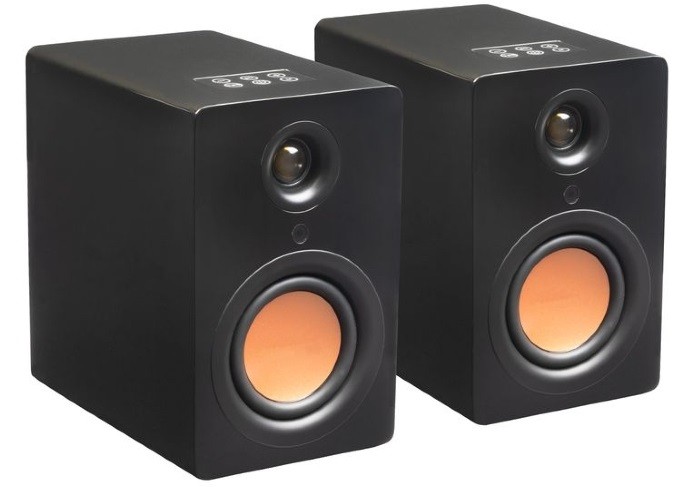 The
UK company Mitchell Acoustics is coming to the USA with an aim to
bring back true stereo listening to folks who otherwise might settle for mono
sound from a single smart speaker or soundbar. The relatively new company was
founded in 2018 by Paul Mitchell (not to be confused with Paul Mitchell Shampoo), who was part of the management team behind
Mitchell & Johnson, another British hi-fi brand launched in 2012. Mitchell
Acoustics has found success in the UK selling wireless bluetooth speakers that
work together in stereo pairs. The company’s most popular product will likely
be the uStream
One
($499/pair) powered bluetooth speakers, which connect to each other wirelessly
without the need for a WiFi network. The smaller uStream Go speakers ($449/pair)
work similarly, but each has a built-in lithium-ion battery good for 30 hours
of playback. Its metal cabinet makes it durable enough for portable use and
also is said to enhance bass response. The larger uStream Two ($999/pair) is
similar to the uStream One, but with a concentric driver array and more
powerful amplification. Mitchell Acoustics is positioning the uStream Two as a
soundbar replacement, able to handle TV audio as well as music streaming. The
TT2 turntable ($349) boasts an aluminum tone arm and platter, a built-in phono stage,
and bluetooth outputs.

Many
consumers who stream music use the standalone mono speakers that are popular
today. They are primarily used out of convenience, but there is no way they can
produce true, high-quality stereo sound. Our uStream series retains the
convenience of these standalone devices but produces beautiful stereo sound,
reminiscent of what hi-fi was like years ago. They can exploit all streaming
options and deliver sound much closer to what the artists and producers
intended.

A
couple of years ago, I saw saw this cool video from WIRED about using sound waves to counteract
gravity and make small objects levitate. This week, I came across a more recent
article from earlier this year about a team of researchers continuing this work
at University College London. These researchers published a paper in the
journal Science Advances about their “self-correcting” levitation
system, which can keep objects airborne even
when other objects interfere with the “levitation path” — the area between the
transducers and the levitating objects. Previously, the object being levitated
would fall if another object interfered with the sound waves. What caught my
attention about this new development was the striking similarity between this
new “self-correcting”
levitation system and Dirac Spatial Room Correction, which promises to overcome previous
limitations in room compensation technology for immersive home theater audio
systems.

If you’ve read our article or watched Gene’s
YouTube video
about Dirac’s new technology, you might find this quote interesting:

To
protect the sound waves from interference, the researchers increased the
number of speakers used… (and) also added software to control each of
the speakers. The speakers were arranged in a grid and objects were levitated
by specifically-shaped sound waves. By programming the speakers in specific
ways, the team was able to get the system to work together to keep an object
above the grid in the air despite interruptions. If some of the sound waves
were blocked, other sound waves were redirected to take their place.